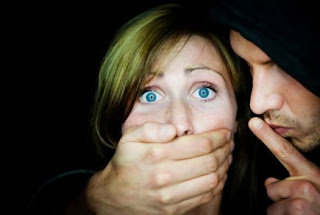 A good friend and I were discussing the condition known as Stockholm syndrome yesterday, and I got to thinking whether this might occur with those people who continue to stay in abusive relationships and, by extension, those who make excuses not to leave a hated job or situation. As it turns out, there is much written on this little-understood subject.

Back in the 1970s, the newspapers of the time used the term Stockholm syndrome to apply to the famous Patty Hearst kidnapping case.  Ms. Hearst, granddaughter of the late William Randolph Hearst and heiress to the Hearst media empire, was kidnapped from her Berkeley apartment by a revolutionary group who called themselves the Symbionese Liberation Army (SLA). She was initially tormented and kept hidden but eventually Ms. Hearst gained sympathy for the SLA’s mission and joined them as a gun-toting accomplice in the robbery of a Hibernia Bank branch in San Francisco, California.
More recently, a young girl, Jaycee Dugard, was rescued after being held for 18 years by a man who kept her hidden in a shed and reportedly raped her. Even though she was allowed to go into town to run errands, Jaycee did not run away, even helping her captor to run his business.
This situation, a kidnapping victim developing empathy and understanding for her tormentors, has been categorized as Stockholm syndrome, based on a bank robbery in the city of the same name in which hostages held at gunpoint for six days wept and hugged their captors as they were being led away by the police.
Vietnam-era prisoners of war have also been observed to have the syndrome, becoming close to their captors and relinquishing their own views in favor of agreeing with their enemy. Prisoners have been reported as saying they appreciated being allowed to live, when so many of their comrades were killed or disappeared.
It is thought that this so-called Stockholm syndrome is the mind’s way of justifying what is happening and to make some sort of sense out of an otherwise incomprehensible situation.
Sources:
http://www.time.com/time/magazine/article/0,9171,1920301,00.html
http://www.trutv.com/library/crime/terrorists_spies/terrorists/hearst/1.html
http://www.time.com/time/magazine/article/0,9171,1920301,00.html
It is not much of a leap to imagine a Stockholm syndrome pattern occurring in bad relationships, whether it be parent-child, husband-wife, or even employer-worker.
Making excuses for an unhappy job situation
Let’s say that “Bob” loses his home and his livelihood and is forced to take a job as a janitor in exchange for rent. Bob sees this as a temporary solution to an immediate problem–however, four years later, he is still a janitor and is at the beck and call of his manager. “Bob” justifies the situation, saying that the manager, however demanding and unreasonable, has “saved his life” by providing him a place to stay and work to do. The question now arises because, after so much time has passed, “Bob” has given up a lucrative career and, along with it, the confidence in his ability to ever get back to his former standard of living. After this long, Bob really despises what he does but finds himself “stuck” there and makes excuses why he can’t change his circumstances.
What about parent-child relationships?
If a kidnapper can gain empathy from his or her victim, how much more would an abused child have a great deal of difficulty hating or blaming a parent or other family member because of the deep family bonds in place. It has been documented that an adult children of alcoholics, for example, often have a limited ability to blame or hate their parents, even years later, feeling a misplaced loyalty for the parent and instead blaming themselves for “being bad.”
How about abusive marriages and relationships?
I wonder how many marriages and relationships last for years, not based upon love or kindness, but upon the belief that the abuser “has good reason” or “is doing the best he (or she) can under the circumstances”? If a prisoner can develop empathy in spite of mistreatment, I would think that an abused husband (or wife) would eventually become incapacitated and unable to leave their abuser.
The sources I’ve consulted seem to agree that Stockholm syndrome is more common than one would think, and perhaps many of us can identify with staying in a bad job situation or an abusive or unsatisfactory relationship for far too long in the mistaken assumption that we are wrong and they are right.
Links:
Love is Respect website
Love and Stockholm Syndrome, Dr. Joe Carver
FBI: Patty Hearst Kidnapping
Recommended reading:
Adult Children of Alcoholics by Janet G. Woititz
The Betrayal Bond: Breaking Free of Exploitive Relationships by Patricia J. Carnes, Ph.D.
Conversations With the Enemy, The Story of PFC Robert-Garwood by Winston Groom & Duncan Spencer
Photo credit:
http://media1.arabia.msn.com/medialib/2012/10/30/qsi94vzh.jpg